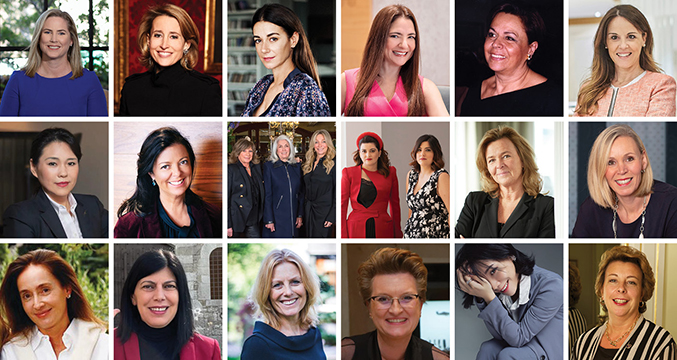 The Leading Hotels of the World Celebrates International Women’s Day

NEW YORK, NY — (March 2021) — Visionary female leaders have shaped The Leading Hotels of the World, Ltd (LHW) since the very beginning. Today this tradition continues. At the helm of LHW is President and Chief Executive Officer Shannon Knapp. And throughout the world, more than 100 female LHW general managers, commercial directors and owners lead LHW’s distinctive hotels, resorts, inns, chalets, villas, and safari camps. Find these ‘Leading Ladies’ from the cliffs of the Amalfi Coast to the modern metropolis of Shanghai. These influential female leaders are shaping the way the world travels and connects with new destinations, culture and people.

Together with the International Women's Day community, LHW celebrates the social, economic, cultural and political achievements of women. LHW joins the 2021 'Choose To Challenge' discussion, acknowledging that a challenged world is an alert world. And from challenge comes change.

The Leading Hotels of the World #ChooseToChallenge by… uplifting women in hospitality and challenging gender bias and inequality. The Company chooses to seek out and celebrate its outstanding women hoteliers and their achievements. Together, with our 400 hotels and thousands of hoteliers, LHW is proud to continue working towards creating an inclusive world.

Find out how LHW’s hotels and inspiring women in leadership #ChooseToChallenge:

At The Leading Hotels of the World I #ChooseToChallenge by… “continuing to grow a progressive organization that celebrates individuality, inclusion and equality. At LHW, generations of intrepid females have paved the way for extraordinary women in hospitality. The Company’s first President in 1950 was a woman, Edith Turner, followed by Mary Homi in 1966. In 2021, women represent more than 60 percent of our workforce, nearly 40 percent of our senior leadership team, and 30 percent of our board. Together with my colleagues we are working towards creating a future where the discussion is no longer focused on gender parity because it is the norm to have women equally represented at all levels in the workplace.”
- Shannon Knapp, President & Chief Executive Officer, The Leading Hotels of the World

At Red Carnation Hotels (that boasts five Leading Hotels: 12 Apostles Hotel & Spa, The Oyster Box, Ashford Castle, The Milestone Hotel & Residences, Hotel d'Angleterre, Geneva) we #ChooseToChallenge by… “empowering our female team members to make a real difference, from working with our sustainable partners such as Belu Water and CleanConscience, both founded by inspirational women, to supporting our local communities and celebrating female creativity through our African art collection at Xigera Safari Lodge. We pride ourselves on striving for gender equality, and I am so proud to work alongside my daughters Victoria and Toni to lead an exceptional team of women (and men) who inspire and support me every day.”
- Beatrice Tollman, President & Founder, Red Carnation Hotels

At Pellicano Hotels (that boasts three Leading Hotels: Hotel Il Pellicano, La Posta Vecchia Hotel, Mezzatorre Hotel & Thermal Spa) we #ChooseToChallenge by… having a company led by a female CEO who focuses on building a team of strong and creative women. Pellicano Hotels and the brand-new ISSIMO platform is partnering frequently with women owned business like Allagiulia, Blazè and Barbara Casasola.

At Acqualina Resort & Residences on the Beach we #ChooseToChallenge by... “having equal representation of women in our workforce as well as our leadership. 50 percent of our team members are women. We continuously take measures to make sure there is pay equality. I have always embraced diversity and gender equality and want our team members to reflect this. I champion this every chance I get, it is my responsibility and my duty.”
-Deborah Yager Fleming, Chief Executive Officer & Partner, Acqualina Resort & Spa on the Beach, Executive Committee Member, The Leading Hotels of the World

At Grand Hôtel Stockholm we #ChooseToChallenge by… being led by a female CEO, who chooses to have 50 percent of the board of directors represented by women.

At Hotel Sacher Wien and Hotel Sacher Salzburg we #ChooseToChallenge by... “celebrating and continuing our history which is built on strong women. Anna Sacher in the 19th century built the foundation of today's world-famous hotel brand Sacher. After the early death of her husband, she had to fight for his successor and thus became one of the first business ladies in the hotel industry. Even then, she opposed social, mostly male, conventions by, for example, welcoming women as guests without being accompanied. That was forbidden at the time, a secret passage made it possible. A century later, it was again a woman who made the hotel the center of high society and the focal point of the Who's Who of art, culture, business and politics, Elisabeth Gürtler, my mother. Today the equality of female employees in the Sacher companies is so firmly anchored in the DNA that it does not require any extra programs or projects. The proportion of female employees is between 50 and 60 percent across all companies. One of two hotels is managed by a woman, both deputies are also female. The manufactory, where the cake is still handcrafted today according to the original recipe by Franz Sacher (Anna‘s father-in-law), is managed by a woman and the CMO of the group is also female. In general, the management positions within the Sacher companies are gender-specifically balanced. Success is celebrated regardless of gender, performance and, above all, always as a team! And there are no differences in wages based on gender either. We generally make sure that the ratio of measures concerning diversity (in general) remain stable.”
- Alexandra Winkler, Owner and Managing Director, Sacher Hotels

At Palazzo Avino we #ChooseToChallenge by… being led by a female CEO with a great team with superwoman leaders in key roles. Being three sisters in the Avino Family we strongly believe in Pink power!

At Gleneagles we #ChooseToChallenge through…“a range of initiatives and career development opportunities which help women to realize their full potential. We have created an apprenticeship scheme which supports women at the start of their careers and a Menopause Café which tackles the taboo of menopause through wellbeing support. We conduct outreach work in the local community encouraging young girls to participate in sports and support the Cycle for Smart Works fundraising challenge that provides funds, clothes and coaching for unemployed women across the country. We celebrate women’s experiences and achievements at all life stages and are committed to empowering women to overcome the barriers to inclusion that they continue to face. This commitment is bolstered by an executive committee that comprises 50 percent women. This presents not just a more diverse leadership team, which leads to better and more thorough decision-making, but positive female leadership role models for the women across our business.”
-Jane McGee, Commercial Director, The Gleneagles Hotel

At Bellagio Shanghai we #ChooseToChallenge by... “creating a work environment with equal opportunity for women to become a leader in their field. As a property with more women in the management level, Bellagio by MGM Shanghai strives to embrace gender diversity, beat the gender stereotype and create a fairer and more inclusive workplace for all. We make sure to celebrate successful stories and women achievements through internal communication channels. As the General Manager, I have round-table meetings with line staff every month and my door is always open to everyone in the hotel. I strive to create a safe space where my employees, especially female employees, are welcome to share their doubts and struggles with me. I am very glad that I can provide some advice, inspire them and empower them to believe in themselves and reach higher goals. As U.S. Vice President Kamala Harris said: Dream with ambition, lead with conviction and see yourself in a way that others might not see you, simply because they’ve never seen it before.”
- Jenny Zhang, General Manager, Bellagio by MGM Shanghai

At Lohkah Hotel & Spa we #ChooseToChallenge by... being led by a female chairman, Sherry Zhou, who focuses on raising awareness for different labels like #femaleleadersinGen-Y #localcultureinheritor and #cross-borderchallenger. As the family heiress, she faces high expectations and her career journey has developed from the financial field to a focus on investment in cultural tourism, with the mission of promoting local culture. Zhou says, “As a female, be confident and brave to face challenges.”

At Hotel Okura Amsterdam we #ChooseToChallenge by... inspiring and developing the next generation of female leading hoteliers of the world. We support, coach and challenge them to have a fabulous career in the hospitality by being the best version of themselves.

At Sonnenalp Hotel we #ChooseToChallenge by... supporting women-focused charities in our community through the Sonnenalp Foundation that was founded by the Faessler family, owners of Sonnenalp Hotel. As part of the Foundation, Sonnenalp’s President & Managing Director Rosana Faessler built, supports and helps fund our local Sonnenalp Breast Center. Efforts are taken to ensure all employees are aware of the services they supply. Each year, Rosana also runs a golf charity tournament to help fund the center. Many of Sonnenalp female staff work this event, contributing to the important cause for the female population of Colorado.

At Villa MaÏa we #ChooseToChallenge by... helping women empower themselves and by stopping to oppose women to men, working on our team spirit everyday single day. And, being led by a woman!

At Castel Monastero we #ChooseToChallenge by… being led by a female General Manager who stands for women meritocracy and believes in gender equality opportunities.

At Guarda Golf Hotel & Residences we #ChooseToChallenge by... being guided by a female leader for whom gender equality is completely natural and effortless, yet absolute.

At Hotel Nassauer Hof we #ChooseToChallenge by having 58 percent of our staff represented by women and being led by a female General Manager who focuses on elevating others and being less transactional and more strategic in all relationships.

About The Leading Hotels of the World, Ltd. (Leading Hotels)
Comprised of more than 400 hotels in over 80 countries, Leading Hotels is a collection of uncommon luxury hotels. Rooted in the locations in which they are found, members embody the very essence of their destination. Through varied styles of architecture and design and distinct cultural experiences enhanced by passionate people, the collection is for the curious traveler looking for their next discovery. Established in 1928 by several influential and forward-thinking European hoteliers, Leading Hotels has a more than nine-decade-long commitment to providing remarkable, authentic travel experiences.  The company selects only hotels that meet its high standards for quality and distinctiveness, resulting in a curated portfolio of hotels united not by what makes them the same, but the details that make them different. Leaders Club is the company’s exclusive tiered guest loyalty program, consisting of like-minded travelers seeking uncommon travel experiences.  The program provides its members with personalized service and exclusive travel benefits to enhance their stays at any Leading Hotel around the world. For more information visit: www.lhw.com, Facebook at @LeadingHotels, Twitter at @LeadingHotels and Instagram @leadinghotelsoftheworld
Return To Press Center